The Lost 45s in Billboard – Duets

“Love the Way You Lie,” by Eminem featuring Rihanna, is the 46th Billboard Hot 100 No. 1 since 2000 specifically sporting a “featuring” artist credit.

Still, high-profile acts have guested on hit songs throughout the rock era, even if they didn’t always receive official billing on single releases.

“Artists used to (make cameos) as more of a favor to each other. Record labels weren’t the all-controlling conglomerates they have become, so it frequently went unnoticed,” says Barry Scott, who has hosted the radio program “The Lost 45s” for more than 25 years. The weekly show spotlights songs that reached the Hot 100’s top 40 from the ’60s through the ’80s but rarely receive airplay today.

“Plus, when buying LPs, everyone looked to see who the other players on the tunes were, from drums to backing vocals; that was the beauty of holding an album or even a 45 in your hand,” theorizes the Boston-based Scott. “The artist received credit in that manner. It is difficult to hold an MP3 in your hand, unless it’s in a memory stick.”

Scott cites a song that entered the Hot 100’s top 40 32 years ago this week as a contrast to today’s more complex music industry.

“When ‘Whenever I Call You ‘Friend’ ‘ by Kenny Loggins was released on Columbia in July 1978, Warner Bros. didn’t bat an eye that one of their biggest stars was a very noticeable uncredited special guest: Stevie Nicks. (Although the part was originally going to go to Loggins’ co-writer, Melissa Manchester, the authors agreed that Nicks would be better suited for the song).

“Once (such appearances) became common practice,” says Scott, “it was too late to go back for a variety of monetary and legal reasons.”

In the spirit of celebrating the contributions of artists not appearing on vinyl or CD picture sleeves (and not adding to their Hot 100 histories), Chart Beat looks at some of the best-known songs sporting somewhat stealthy guest appearances.

“You’re So Vain,” Carly Simon
Is the song about Warren Beatty? David Geffen? Mick Jagger? While Simon has never ended all speculation, what is confirmed is that Jagger sings backup vocals on the single, which ruled the Hot 100 for three weeks in 1973.
“I Guess That’s Why They Call It the Blues,” Elton John
The Rocket Man played piano and enlisted the talents of Stevie Wonder to supply the track’s trademark harmonica flourishes. The song reached No. 4 on the Hot 100 in January 1984.
“Somebody’s Watching Me,” Rockwell
Rockwell was born Kennedy Gordy … the son of Motown founder Berry Gordy (although the singer reportedly earned his record deal with the label without his father’s knowledge). Not only does Michael Jackson sing the song’s chorus, but another childhood friend of Rockwell also provides vocals: Jermaine Jackson. “Somebody’s Watching Me” reached No. 2 on the Hot 100 and spent five weeks atop R&B/Hip-Hop Songs in 1984.
“Money for Nothing,” Dire Straits
“I want my MTV,” sings Sting on the wry ode to rock star excess. The song became Dire Straits’ sole Hot 100 No. 1 for three weeks in 1985.
“Take a Bow,” Madonna
With background vocals and production from Babyface, Madonna scored her longest-reigning Hot 100 No. 1 (seven weeks, 1995). The lush ballad also remains her last top 40 hit to-date on R&B/Hip-Hop Songs (No. 40).
“Whatever Gets You Thru the Night,” John Lennon
Lennon’s only solo Hot 100 No. 1 while he was alive features Elton John on vocals, piano and organ. The song ruled the list the week of Nov. 16, 1974, and the pair performed the track live at John’s Thanksgiving night concert at Madison Square Garden in New York 12 days later.
“Paradise By the Dashboard Light,” Meat Loaf
Not sure how many people realize that the female vocal on the song, which peaked at No. 39 on the Hot 100 in 1978 (a surprisingly low rank considering the cut’s durability), is that of Ellen Foley, an actress/singer who subsequently appeared on the first two seasons of NBC’s “Night Court.” Foley was not credited on the epic track’s cover art, nor was another voice heard on the song: late Yankee legend Phil Rizzuto.
“Ride Like the Wind,” Christopher Cross
Cross’ innovative debut single, which spent four weeks at No. 2 on the Hot 100 in 1980, fused pop, rock and soul, with Michael McDonald’s vocals most responsible for its lattermost style. The pair reunited for a performance of the song, with the Roots, last year on “Late Night With Jimmy Fallon.”
“I’ll Be Your Everything,” Tommy Page
In 1989, Page toured as the opening act for New Kids on the Block and Tiffany in a pure pop triple bill. Page collaborated with the boy band in the studio, as well, co-writing and adding the group’s vocals to his sole Hot 100 No. 1, which reigned the week of April 14, 1990. Page – famously the object of DJ and Stephanie Tanner’s affections on ABC’s “Full House” – additionally recorded a duet with Tiffany, “Close Our Eyes,” for her 1996 “Greatest Hits” collection.
“I’ll Be There,” Mariah Carey
Carey’s 1992 Hot 100 No. 1 Jackson 5 cover, from her “MTV Unplugged” special, shone a prominent spotlight on background singer Trey Lorenz. Later that year, Lorenz reached No. 19 on R&B/Hip-Hop Songs with “Someone to Hold,” which the pair co-wrote and produced. They sang “I’ll Be There” together last year at Michael Jackson’s memorial at the Staples Center in Los Angeles.

Listeners Find A Favorite in “The Lost 45s”

Clea Simon/BOSTON GLOBE Barry Scott has accumulated an odd collection of chart-topping numbers. Not only does he have the songs he plays every Sunday evening on WODS-FM (103.3) - forgotten favorites from such artists as Sweet, Kiki Dee, and Blue Swede that he calls "Lost 45s." He also has some of the most consistent ratings of any longtime Boston DJ: In its 7-Midnight Eastern time slot (also streaming live at […] 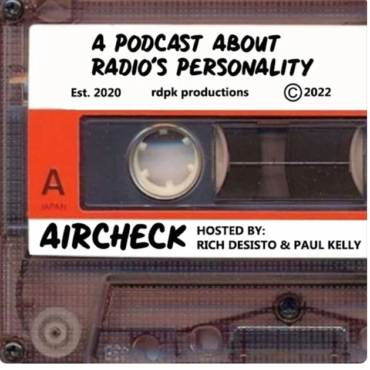 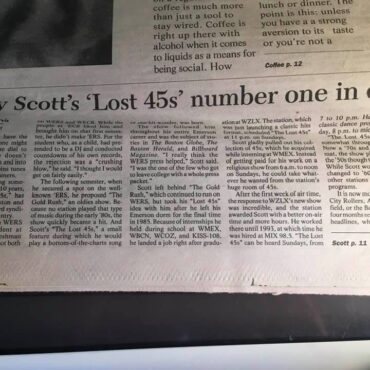