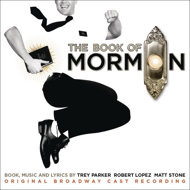 Last June, The Book of Mormon, the musical written by the creators of the raunchy hit cartoon series South Park on the US cable channel Comedy Central, won nine Tony Awards and the soundtrack raced up the Billboard pop chart to third, behind Adele and Lady Gaga.
This marked the first time since 1969, when the cast recording of Hair was in first for 13 weeks, that a Broadway musical was at the top of the Billboard pop charts.

Cher's son, Chaz Bono (formerly daughter Chastity) starts this week as the first transgender contestant ever on "Dancing With the Stars" (Season 13). Chaz was well known as the pig-tailed daughter of Sonny & Cher from her numerous appearances on that 70s TV show.