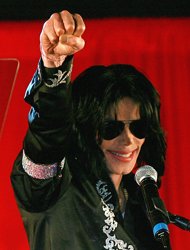 Just in time for Halloween and “Thriller” airplay; We get this news:

For a second straight year Michael Jackson is the world’s top dead earner, according to a macabre list compiled by Forbes magazine of stars whose earning power remains undiminished beyond the grave.

The King of Pop, who died two years ago at the age of 50, brought in $170 million for his estate over the past 12 months, enough to place him ahead of every other pop music act of the past year — both living and dead — except for Irish rock band U2.

Lionel Richie is going country. The smooth R&B singer will perform country duets on his upcoming album "Tuskegee" -- named after his Alabama birthplace. Richie, 62, best known for romantic ballads like "Three Times a Lady" and "Endless Love", will sing a country version of his hit song "Dancing on the Ceiling" with Rascal Flatts on "The "Tuskegee" album, due out in March 2012; which will feature 13 duets of his biggest hits.