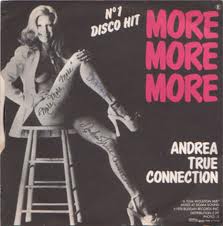 The leader of the 1970s disco act Andrea True Connection has died, according to the funeral home handling her arrangements. Andrea Marie Truden, who lived in Woodstock, was 68 when she died. A cause of death was not released.
Truden’s band is best known for the 1976 disco hit “More, More, More” and also released the singles “N.Y. You Got Me Dancing” in 1977 and “What’s Your Name, What’s Your Number” in 1978.

Gary Garcia, who teamed with Jerry Buckner to perform the 1982 hit 'Lost 45' "Pac-Man Fever," a song synonymous with 1980s pop culture and America's early love affair with arcade gaming, died yesterday at his home in Englewood, Fla. He was 63.