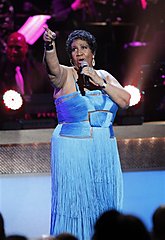 Aretha Franklin won’t be getting fitted for a wedding gown after all: She’s called off her engagement. A statement released Monday by her representative said Franklin’s wedding to Willie Wilkerson wasn’t going to happen.
“Will and I have decided we were moving a little too fast, and there were a number of things that had not been thought through thoroughly. There will be no wedding at this time,” Franklin said. “We will not comment on it any further because of the very personal and sensitive nature of it. We appreciate all of the many well wishes from friends.”
Franklin, 69, announced shortly after New Year’s Day that she was getting married.

During a campaign appearance Thursday night at the famed Apollo Theater in Harlem, New York, President Barack Obama got the crowd cheering with a tune. After legendary soul singer Rev. Al Green performed, the Commander-in-Chief took the stage and crooned a few lines of Green's hit song "Let's Stay Together." "I..I'm so in love with you," the President sang, showing off just a touch of the falsetto. The audience cheered loudly and Obama joked that "the Sandman" didn't appear to […]