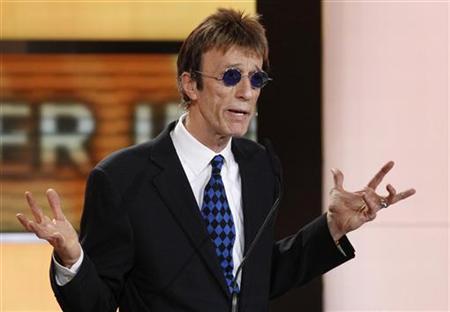 Singer Robin Gibb, who spoke last month of making a “spectacular” recovery from cancer, had slipped into a coma raising fears that the 62-year old star is in the final stages of cancer. Gibb has been battling colon and liver cancer and recently developed pneumonia. Earlier this week he was admitted to hospital again and could not attend the premiere of his stage production ‘Titanic’. He reportedly awoke from his coma on April 21st.
His brother Barry has flown to London to be by his side. His wife Dwina, and children Melissa, Spencer and Robin-John are keeping vigil by his bedside.
The 62-year-old is a founding member of the hit machine the Bee Gees.

Earl Scruggs, who as a child developed the distinctive picking style that forever changed banjo playing, and whose association with Lester Flatt cemented bluegrass music's place in popular culture, died Wednesday of natural causes at a Nashville hospital. He was 88. For many of a certain age, Scruggs' banjo was part of the soundtrack of an era on "The Ballad of Jed Clampett" -- the theme song from the CBS sitcom "The Beverly Hillbillies," which aired on CBS from 1962 […]