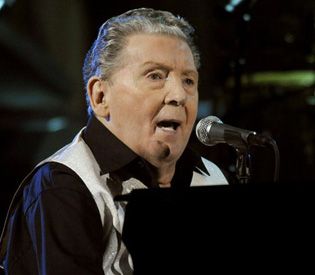 Rock ’n’ roll legend Jerry Lee Lewis has married for a seventh time in Mississippi, and the new bride is his cousin’s ex-wife. The Adams County circuit clerk’s office said the marriage license shows Lewis was married March 9 to Judith Ann Coghlan Brown in Natchez, Miss. The 76-year-old Lewis, also known as “The Killer,” is famous for top hits like “Great Balls of Fire” and “Whole Lotta Shakin’ Goin’ On.”
The bride, who is in her early 60s, was previously married to one of Lewis’ cousins and was close to his daughter, Phoebe Lewis, said the bride’s sister, Carolyn Coghlan Gremillion of Madison. She said Brown started working for Lewis several years ago as his caretaker.
“Deliverence” theme anyone??

Singer Robin Gibb, who spoke last month of making a "spectacular" recovery from cancer, had slipped into a coma raising fears that the 62-year old star is in the final stages of cancer. Gibb has been battling colon and liver cancer and recently developed pneumonia. Earlier this week he was admitted to hospital again and could not attend the premiere of his stage production 'Titanic'. He reportedly awoke from his coma on April 21st. His brother Barry has flown to […]