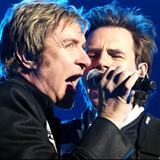 Duran Duran will release a new live-set on July 2 in the U.K. (date not yet announced for the U.S.) called “A Diamond in the Mind.” According to Duran Duran’s official site, the Deluxe Edition of the set will include a Blu-Ray, DVD, CD and booklet.
The concert was filmed on December 16, 2011 at the MEN Arena in Manchester, England.

Never mind that the average age of the five main members of the reunited Beach Boys is 68, it didn't stop them from putting on a two-set, 42-song show for the opening of their 50th Anniversary Tour Tuesday night in Tuscon. Reviews have generally been very good for the show with critics marveling at how well Al Jardine and Mike Love can still hit the notes on the classics.