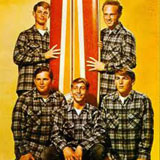 Never mind that the average age of the five main members of the reunited Beach Boys is 68, it didn’t stop them from putting on a two-set, 42-song show for the opening of their 50th Anniversary Tour Tuesday night in Tuscon. Reviews have generally been very good for the show with critics marveling at how well Al Jardine and Mike Love can still hit the notes on the classics.

Dick Clark, the music industry maverick, longtime TV host and powerhouse producer who changed the way we listened to pop music with "American Bandstand," and whose trademark "Rockin' Eve" became a fixture of New Year's celebrations, died today at the age of 82. Clark's agent Paul Shefrin said in statement that the veteran host died this morning following a "massive heart attack."