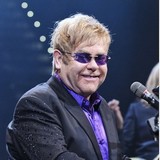 Elton John and husband David Furnish are set to become parents again according to reports. The couple welcomed their son Zachary Furnish John on December 25 2010 via a surrogate. The Daily reports that the music superstar and his partner of nearly 20 years will soon be expanding their family. ‘He hired the same surrogate to make another baby,’ a source told the publication. ‘She’s in her first trimester.’
It is also reported that the woman, who was found through The Center for Surrogate Parenting in Encino, California, is the same person who carried Camille and Kelsey Grammer’s two children.

Michael Jackson's brother Randy Jackson has called into Al Sharpton's program on MSNBC got talk about the latest developments in the Jackson family soap opera. Randy insists that his mother is fine and staying with his sister Rebbie in Arizona. The call comes after his mother Katherine issued a statement saying that Janet, Jermaine and Randy conspired to basically kidnap Michael's children Paris, Prince and Blanket from her home yesterday. The Jackson soap opera continues.