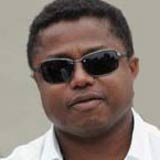 Michael Jackson’s brother Randy Jackson has called into Al Sharpton’s program on MSNBC got talk about the latest developments in the Jackson family soap opera. Randy insists that his mother is fine and staying with his sister Rebbie in Arizona. The call comes after his mother Katherine issued a statement saying that Janet, Jermaine and Randy conspired to basically kidnap Michael’s children Paris, Prince and Blanket from her home yesterday.
The Jackson soap opera continues.

George Michael had to learn to walk again after his battle with pneumonia. The singer was hospitalized with the illness while on tour in Vienna last year. He has opened up about the experience, explaining he fell ill while in the UK but didn't listen to calls for him to visit a doctor. He played shows for three more weeks, before eventually becoming so unwell he needed urgent help. Next up: The Wham reunion!