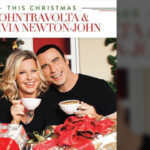 It’s been more than three decades since John Travolta and Olivia Newton-John made their first single together, and the pair are reuniting for the holidays. Travolta and Newton-John have collaborated on a holiday album called “This Christmas,” which will be available on November 13. The album will feature an original song from the “Grease” stars titled “I Think You Might Like It,” a sequel to their best-selling duet, “You’re The One That I Want” written and produced by John Farrar (who wrote the original hit).
That song actually sparked the idea for “This Christmas,” as the news that the 1978 track from the “Grease” film was an all-time best-seller prompted Newton-John to text the headline to her singing partner over the holidays.
“From the moment we decided to do this, magic happened,” Travolta said in a statement. “Everyone we contacted agreed to do it.”

R. B. Greaves, an R&B singer whose 1969 hit "Take a Letter, Maria" reached No. 2 on the Billboard pop chart, died on Thursday in Los Angeles. He was 68. Mr. Greaves was a nephew of the gospel and soul singer Sam Cooke, who was shot and killed by a Los Angeles motel manager in 1964. Mr. Greaves’s 1970 version of Burt Bacharach and Hal David’s “Always Something There to Remind Me" reached No. 27 on the Billboard chart.