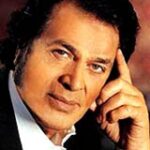 Pop legend Engelbert Humperdinck will record with The Break which includes members of Midnight Oil and the Violent Femmes. The artists will rerecord “Ten Guitars” — a song that was originally the B-side of Humperdinck’s 1967 single Release Me. The A-side reached no 1 in the UK, no. 2 in New Zealand, no. 3 in Australia and no. 4 in the USA; however, the B-side took on a life of its own when it became a Maori (people from Polynesia who settled in New Zealand) anthem.

Marvin Gaye's son doesn't want Lenny Kravitz to portray his late father in a biopic he calls 'shameful'. Lenny has been tipped to play the Motown star in an upcoming film which is said to focus on Marvin's life in the '80s and his battle with drug abuse and depression. Son Marvin Gaye III is said to be against the making of the movie, which has the working title "Sexual Healing."