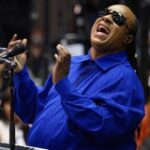 Stevie Wonder has followed in Charlie Sheen’s footsteps by donating money to a little girl battling cancer.
It was recently revealed that Charlie wrote a check for $75,000 after hearing about ten-year-old Jasmine, who has been diagnosed with Childhood Rhabdomyosarcoma.
TMZ is now reporting that singing legend Stevie is the latest famous face to donate to the fund for Jasmine. Over the weekend, the star was performing at the Nokia Theatre in Los Angeles when he invited the little girl to join him on stage so he could present her with a $100,000 check.
Stevie performed his hit song “Isn’t She Lovely” for Jasmine, who responded to his grand gesture by giving him a hug. She then grabbed the mic and shouted, “I love you Stevie!”

Our "Lost 45" pal Dolly Parton would have 'come out of the closet just a-flying' if she was gay. The country music star has been married to her husband Carl Dean for 46 years. He has chosen to stay out of the limelight during her career, leading to a lot of speculation about his marriage to Dolly. The star has endured claims Carl doesn't exist, as well as allegations she is a secret lesbian. The 66-year-old is so secure in […]