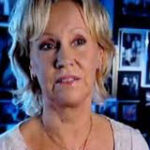 Agnetha Faltskog, formerly of ABBA, has confirmed she will have a new album in 2013. The songstress confirmed back in October, 2012 that she was working on her first album since ‘My Colouring Book’ in 2004.
Early reports said Agnetha was working with Jorgen Elofsson (Britney Spears, Kelly Clarkson) on the record indicating that we can expect a pure pop record from the Abba star.
In an interview with Sweden’s Expressen newspaper this week she admitted that she had not planned to make another album but liked the material Elofsson was writing for her and decided to record again.

Fontella Bass had a massive hit in 1965 with 'Rescue Me'. She died following a heart attack this week in her hometown of St Louis, Missouri. Fontella Bass spent four weeks at number one on the Billboard chart with 'Rescue Me' in 1965. Fontella was born on July 3, 1940 and died on December 26, 2012. Her mother was gospel singer Martha Bass, of the Clara Ward Singers. She started her professional career at age 17 and soon after scored […]