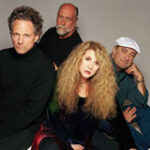 The 2013 New Orleans Jazz and Heritage Festival is full of veteran artists. Leading the bill, from the veteran’s side, is Fleetwood Mac who just recently announced they would be touring in 2013. Other major names include Billy Joel, Earth Wind and Fire, Willie Nelson, Daryl Hall and John Oates and B.B. King. On the modern side, the festival includes the Dave Matthews Band, Maroon 5, John Mayer, the Black Keys and many more.
This year’s festival will be held from April 26 to May 5.

30 years ago, Men Without Hats told the world 'You can dance if you want to.' The world listened. Since then, the Canadian electronic rock new wave group has continued to create iconic and irresistible pop music. In February, they embark on their first European tour in over 20 years, performing all their classic hits including 'The Safety Dance', 'I Got The Message', 'Pop Goes The World', 'I Like', 'Living In China', plus songs from their critically acclaimed new studio […]