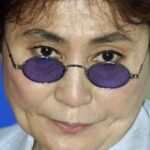 Mrs. Lennon is 80-years old today. Yoko Ono was born in Tokyo on February 18, 1933. She met John Lennon at an art exhibition in 1965. They married in 1969. It was the second marriage for John and third for Yoko. Towards the end of The Beatles, John and Yoko formed the Plastic Ono Band. The first album was ‘Live Peace In Toronto 1969’ on The Beatles Apple label. The first single was ‘Give Peace A Chance’
In 1973, John and Yoko separated for an 18-month period but reconciled in 1975. Soon after, son Sean was born. Sean’s birth prompted John to retire. For the next five-years John stayed home at the Dakota building in New York and raised Sean.
In 1980 John returned to the studio. The couple recorded the ‘Double Fantasy’ album, released on November 1980. Then on December 8, 1980, John was murdered. Yoko has released 14 solo albums and seven albums with John. There has also been the two tribute albums attached to her name, ‘Every Man Has A Woman’ (1984) and ‘Mrs Lennon’ (2010).

"Lost 45s" guest, lead singer Reg Presley of British band The Troggs has died, CNN has confirmed. He was 71. Famous for the 1966 song "Wild Thing," Presley and The Troggs were also behind other hits like "With a Girl Like You," "I Can't Control Myself" and "Love Is All Around." The BBC reports that Presley died at his home in the U.K. surrounded by his family. The singer had reportedly been diagnosed with lung cancer the year before.