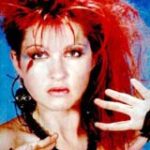 It has been thirty years since Cyndi Lauper released her debut album, “She’s So Unusual.” The iconic “Girls Just Want to Have Fun” (and the just as iconic Captain Lou Albano video), “Time After Time,” “She Bop,” “All Through the Night” and the rest of the album sound as fresh today as when they were released in 1983.
To celebrate the anniversary, Lauper will be performing the entire album plus a selection of her other best known material on the “She’s So Unusual” Tour, starting June 12 in San Diego, CA and running through July 13 at the MGM Grand in Las Vegas.

Reggae stars UB40 have announced a series of UK arena dates for 2013 and a new studio album, 'Getting Over The Storm', which will be released later this year. This is UB40's first tour since 2010, where the band performed their classic debut album 'Signing Off' in its entirety to celebrate the 30th anniversary of its release. UB40 are One of the most successful reggae groups of all time, with over forty UK Top 40 hit singles and sales of […]