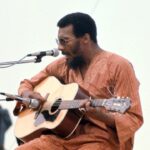 Folk singer Richie Havens, the opening act at the 1969 Woodstock music festival, died Monday of a sudden heart attack, his publicist said. He was 72. Havens, who retired three years ago, toured for more than 30 years and recorded 30 albums. After Havens, a Brooklyn, New York, native, gained attention at Woodstock, he recorded a soulful-voiced cover of the Beatles’ “Here Comes the Sun,” which rose on the pop charts in 1970. Havens returned to Woodstock for the 40th anniversary festival in 2009.

Research released by ICM today reveals that 18-24 year olds are driving the resurgence in sales of vinyl format music. This resurgence of vinyl is almost entirely enabled by independent record stores that are currently enjoying a period of measured growth after having declined in numbers from 2,200 in the 1980s to just under 300 today. In the last month, 5% of the respondents had bought music in vinyl format. The most surprising finding from the research was that sales […]