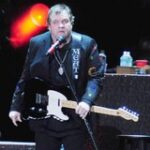 Meat Loaf is jealous of Bruce Springsteen because he can still slide across the stage on his knees. The 65-year-old singer is currently on his “Last at Bat Tour,” which is being billed as a farewell series of shows. Meat Loaf has claimed previous tours would be his last, but this time around he is adamant he won’t be returning to the stage. As much as he loves performing for fans, health problems mean he can’t do it anymore. He has collapsed on stage in the past and cancelled several Last at Bat Tour dates due to health problems.
“This really is my final tour. I won’t be talked out of it. I’ve had all these concussions, and they’re now starting to play havoc with my equilibrium and balance. I was upstairs getting dressed earlier and if you’d had a camera on me you’d be asking, ‘How much has that guy had to drink?’ That’s a problem on stage,” he explained to Q magazine.

The Billboard Music Awards, which give out trophies for the biggest selling, streaming, etc. music, just announced their nominees. Because they are based on popularity, the list is full of artists who have received huge amounts of airplay vs. those that may be artistically sound but haven't crossed into the mainstream. For veteran artists, Madonna is in the lead with three (Touring Artist, Dance Artist, Dance Album), Bruce Sprinsteen for two (Touring Artist, Rock Artist) and Roger Waters and Lionel […]