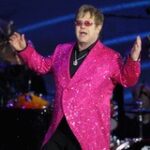 Sir Elton John asked fireman if his son could go in their truck after the tot went wild when he saw them. The British singer and his partner David Furnish are parents to Zachary, two, and four-month-old Elijah. Zachary is obsessed with firefighters and couldn’t contain himself when he saw two men in the uniform while out shopping with Elton. The tot began yanking on his father’s arm and pointing at the gents, much to the musician’s amusement. “Elton approached the guys, introduced himself, told them Zac’s a huge fan of firefighters and would just love to ride on a real fire truck,” a source laughed to National Enquirer.

My dear friend, singer/songwriter and all around great guy, Alan O'Day, passed away yesterday. He was a guest on "The Lost 45s" many times. He went to #1 twice, once as a songwriter ("Angie Baby" by Helen Reddy) and once himself with "Undercover Angel"--one of your favorite "Lost 45s." He also wrote hits like "Rock & Roll Heaven" for the Righteous Brothers, "Train of Thought" for Cher and "The Drum" by Bobby Sherman. He was an angel in life and […]