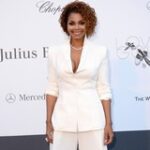 Janet Jackson likes to keep ‘meticulously clean’ when she is flying, it has been reported. The singer recently boarded a British Airways flight from London to Los Angeles and spent some time wiping her seating area down with antibacterial spray, reports New York Post. It has been claimed that Victoria Beckham was also travelling in the first class section of the plane as Janet began to clean up.
‘Janet had anti-bacterial spray, and was pulling one tissue out of a bag after another,’ a source told the newspaper. ‘This wasn’t a normal rubdown; this was 40 minutes of meticulously wiping everything.’

Ringo Starr proudly announces the upcoming release of PHOTOGRAPH, a collection of never-before-seen material, including photos taken by Ringo as well as exclusive images from his own personal archives. The material will first be published as an ebook on June 12 2013 in conjunction with the Grammy Museum Exhibit, 'Ringo: Peace & Love', where select images from the book will be displayed. A limited-edition hand-bound book, signed by Ringo Starr, will follow in December 2013. "These are shots that no […]