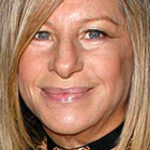 Barbra Streisand has received 10 Grammys, including the Grammy Lifetime Achievement and Grammy Legend Awards, 51 gold albums, 30 platinum albums, and 13 multi-platinum albums. According to the RIAA, Barbra Streisand is the #1 best selling female recording artist in history and the only woman to make the Top 10 all time best selling artists list.
An artist of unparalleled accomplishments in multiple entertainment fields, Streisand has made her mark as an award winning actress of stage and screen, recording artist, concert performer, film director, producer, screenwriter, songwriter, philanthropist, designer, photographer, author and activist.

Rock legend Lou Reed is recovering after a liver transplant that, according to wife Laurie Anderson, saved his life. The 71-year Reed agreed to be admitted to the Mayo Clinic in Cleveland, Ohio after rejecting New York hospitals because he claimed were 'dysfunctional'. Reed cancelled five dates in April including his Coachella appearance because of his condition. Anderson has now admitted that Reed had been placed on life-support.