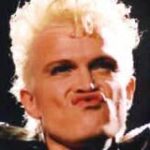 Billy Idol is looking at a very busy 2013 and an even busier 2014. Idol spoke with reporters last week via a conference call about his upcoming show at the Bonnaroo Festival and let slip with information on other upcoming projects.
Up first is a new album which he hopes to record in the fall, so a 2014 release is in order: “I’ve been gradually putting new songs together. A couple of them are a little more ballad-like, but of course we balance those off against a lot of the sort of fun Idol songs that people know and expect.” Then, he is working on his autobiography.

Paul Anka is on the receiving end of a lawsuit brought by Mohamed Al-Fayed, the father of the late Dodi Fayed. According to TMZ, Anka wrote at length in his autobiography My Way on his dealing with the younger Fayed and the fact that his father was always cleaning up after his messes. In Anka's case, Dodi lost $150,000 when it was seized by customs entering the U.S. so Paul loaned him the money so that he wouldn't be in […]