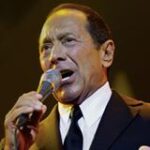 Paul Anka is on the receiving end of a lawsuit brought by Mohamed Al-Fayed, the father of the late Dodi Fayed.
According to TMZ, Anka wrote at length in his autobiography My Way on his dealing with the younger Fayed and the fact that his father was always cleaning up after his messes.
In Anka’s case, Dodi lost $150,000 when it was seized by customs entering the U.S. so Paul loaned him the money so that he wouldn’t be in trouble with his father. When Dodi’s repayment check bounced, Mohamed had to get involved out of fear that Anka would publicize the situation.
Mohamed Al-Fayed says that the stories are false while Anka has stated that he has everything he needs to back up his claims. Dodi Fayed was killed when the car in which he was riding with Princess Diana crashed while being pursued by paparazzi

The Johnny Cash Museum had its official opening in Nashville this past week. The museum was founded by Shannon and Bill Miller who told The Tennessean 'Elvis has Graceland, but there was really nothing left anymore for us. We really needed to bring it back to Tennessee. We needed to have something for all of the fans. We're just really happy to be able to tell the fans there's a place to come celebrate Johnny Cash and be a part […]