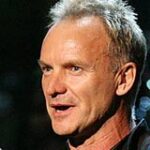 After ten years of live albums, re-releases of his catalogue and lute music, Sting is finally returning to the studio to record a new material. “The Last Ship” is scheduled for release this fall according to the New York Times. The songs are from a musical that Sting is writing for a possible 2014 Broadway run about the shipyard in his hometown of Wallsend, England.
Sting has been writing the songs for over three years with collaborators John Logan, who just won an Academy Award for the song “Skyfall” and Brian Yorkey who wrote the musical “Next to Normal.” Of the songs on the album, some will be included in the final production while others have been cut from the show.

Billy Idol is looking at a very busy 2013 and an even busier 2014. Idol spoke with reporters last week via a conference call about his upcoming show at the Bonnaroo Festival and let slip with information on other upcoming projects. Up first is a new album which he hopes to record in the fall, so a 2014 release is in order: "I've been gradually putting new songs together. A couple of them are a little more ballad-like, but of […]