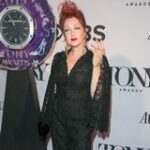 Cyndi Lauper scored her first-ever Tony Award Sunday night. The singer, who will turn 60 later this month, took home the Tony for best original score. Cyndi penned the 15-song soundtrack of Broadway musical Kinky Boots. Taking the stage was an emotional moment for the Pop star. Her work on the hit marked her Broadway debut.
She took a moment before making her way to the stage and gave a speech that endeared a crowd of her peers in musical theatre.

In September, a unique series of very special DVD/CD packages, 'Live From Metropolis Studios' ' from 4 multi-platinum selling artists - Belinda Carlisle, Spandau Ballet's Tony Hadley, Heaven 17 and Level 42 will be released. They feature countless hit singles and album tracks performed in front of an intimate live 'fan only' audience at the legendary West London studio complex. This quartet of artists who illuminated the 1980s with such all-time classics as "Something About You," "True, "Heaven Is A […]