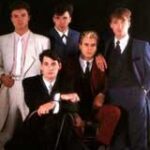 Spandau Ballet is planning on some special shows with a full orchestra. “Lost 45s” guest Tony Hadley told the show BBC Breakfast ‘We’re going to orchestrate Spandau’s greatest hits plus a couple of obscure numbers that I probably haven’t sung in 30 years. It’s going to sound beautiful, lush; but it’s going to sound big!’
Anne Dudley, who has also worked with ABC and Frankie Goes to Hollywood, is conducting and doing many of the orchestrations. Hadley says that the show will be retro and they will be playing older venues but, at the same time, he will be releasing a new album.

Cyndi Lauper scored her first-ever Tony Award Sunday night. The singer, who will turn 60 later this month, took home the Tony for best original score. Cyndi penned the 15-song soundtrack of Broadway musical Kinky Boots. Taking the stage was an emotional moment for the Pop star. Her work on the hit marked her Broadway debut. She took a moment before making her way to the stage and gave a speech that endeared a crowd of her peers in musical […]