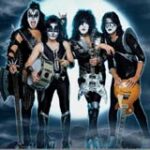 Paul Stanley was supposedly hurt during a KISS show in Copenhagen, Denmark last Tuesday night, but that was news to him. Stanley wrote on his website:
“Hey everybody! The reports of me getting hurt in Copenhagen are total fabrication. I read it and it was news to me and I was there and would know!”
Reports said that he got his foot caught on the stage and fell, cutting his arm. He supposedly played through the injury, although it was said that he was bleeding. It was also reported that the giant mechanical spider that is part of the new KISS set broke down during the show.

Music legend Joni Mitchell suggests that a lot of Bob Dylan's longevity has to do with his invention of 'his character'. 'I like a lot of Bob songs,' Joni told CBC Music's Jian Ghomeshi. 'Musically he's not very gifted. He has borrowed his voice from old hillbillies. He's got a lot of borrowed things. He is not a great guitar player. He has invented a character to deliver his songs. You can do things with that character'. When asked about […]