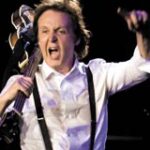 ‘Last time we talked I wasn’t that familiar with your work’, joked host Stephen Colbert as he began his interview with Sir Paul McCartney. During a 12-minute interview entitled, ‘Stephen Colbert’s Tribute To Having Paul McCartney On His Show Feat. Paul McCartney With Special Guest Stephen Colbert’, the television host and the former Beatle seemed to have a good rapport.
There was some playful arguing over the pronunciation of the word ‘schedule’ (‘Sh-edule is correct, sk-edule is incorrect’, informed McCartney) and to the host’s obvious delight, an impromptu duet of ‘Cheek To Cheek’, (a song McCartney wishes he could have written).
‘You try to be modest. I do pinch myself sometimes and think, you know, I’ve done pretty good’, when reminded he’s had a mind-boggling 71 US Top Ten hits.

Debbie Harry never felt the "need" to have children. The 67-year-old Blondie front woman has never married but describes the band's guitarist Chris Stein as her life partner. Debbie gets frustrated when asked if she has regrets about not becoming a mother, as she feels she's given back to the world in other ways. 'I'm certainly not the only woman in the world who never had children,' she explained to The Edit. 'There are many reasons why Chris and I […]