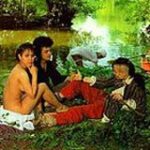 After 32 years as the on-again/off-again lead singer of British new wave band Bow Wow Wow, Annabella Lwin left to work on her solo career. Earlier this year, the band brought on Chloe Demetria to front the band, now made up of original bassist Leigh Gorman, guitarist Matthew Fuller who joined in 2012 and new drummer Tig Moore.
Demetria, originally from Stillwater, MN, was previously an independent musician in Los Angeles after having attended the Berklee College of Music in Boston. Now, she’ll be singing “I Want Candy!”

Cher would have loved to audition for The Voice when she was younger. The 67-year-old performed her new track "Woman's World" on the American talent show on Tuesday. It has been ten years since her last musical stage appearance and she is impressed with how quickly people are now rising to fame. 'Going on shows like this, this is an amazing thing. . When I first started, we played bowling alleys and roller rinks,' she told Entertainment Weekly. 'We didn't […]