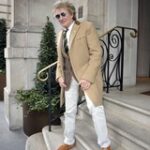 Rod Stewart’s children are his “fountain of youth”. The 68-year-old British singer has six adult offspring and shares two small tykes with his wife Penny Lancaster. Alastair, seven, and two-year-old Aiden always expect Rod to get involved in their games, no matter how energetic. Rod regularly plays soccer with the older lad, even though he has knee problems.
‘He comes home from school and says, ‘Dad, let’s go!’ Then I have a stretch and go play,’ Rod told People magazine. ‘If there’s a fountain of youth, it’s children.’
Rod admits raising extremely wealthy kids brings some unexpected challenges. ‘I battle constantly with whether I’m not spoiling my children,’ he said. ‘I try to instill my values in them, and they’ll say, ‘Dad, we didn’t grow up like you. Where’s the comparison?’ But they’re great. They keep me alive!’
Apparently his toddler boy Aiden has absolutely no idea what his dad’s occupation is.
“My two-year-old son doesn’t even know what I do for a living yet… he’s never seen me on stage. He’s coming to his first concert in one of the British shows. He thinks I’m a plumber, like my dad was,’ Rod told the BBC recently.

Australia's Rick Springfield will soon join the Hollywood Walk of Fame. The Hollywood Walk of Fame committee has announced its list for 2014 honorees. The world of music will see four artists get stars including two veterans, Rick Springfield and the Motown writing team of Brian Holland, Lamont Dozier and Eddie Holland. Also being honored (too soon, I'd say) is Katy Perry. From the TV side, honorees are Dabney Coleman, Claire Dannes, Diedre Hall, Cheryl Hines, Don Mischer, Kaley Cuoco, […]