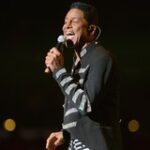 Paris Jackson needs to learn “there are rules”, says her uncle Jermaine Jackson. The 15-year-old daughter of Michael Jackson is currently in the hospital after attempting suicide last month. It has been claimed that Paris has struggled to cope following the death of her father, and had a strained relationship with her guardian grandmother Katherine Jackson.
Jermaine was quizzed on Paris’ situation yesterday and seemed to suggest that the teenager has a lot to discover about becoming an adult. “[Paris] has to learn there are certain guidelines when you grow up being a teenager,” he told TMZ. “There are rules.”
“It’s tough. She was daddy’s girl. My uncle was her world,’ he said. ‘Paris has a heart of gold. I just think the loss of my uncle has hit her at a different level. She’s in a tough spot, but we’re all loving her and doing everything we can to get her where she should be.’
Jermaine also hinted that those responsible for Paris’ welfare need to take a tougher approach. “I just think that… things could have been enforced a little stronger.” he added.

"Lost 45s" guest, Rickie Lee Jones, has a new CD! The critically acclaimed and inventive singer-songwriter's latest, "The Devil You Know" - on which she turns her focus to the rock & roll masterworks that shaped a generation, including the Rolling Stones' 'Sympathy for the Devil' and 'Play With Fire', Neil Young's 'Only Love Can Break Your Heart' and more. 'Rickie Lee Jones has made a career out of surprising people. She takes on these iconic tracks fearlessly and never […]