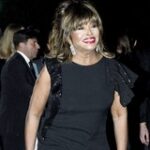 Tina Turner will reportedly marry later this month. The American singer has been dating German music producer Erwin Bach for over 25 years and in April it was reported they were engaged. The couple are now planning to tie the knot, with claims the wedding will take place in Europe. Tina, 73, and her beau have lived together in Zurich for over 15 years.
“According to reports, Turner and Bach will tie the knot at their home on Lake Zurich on July 21,” reported the New York Post. The couple met when he was a producer for label EMI in 1985. They spent time getting to know each other and eventually began a relationship a year later.

Music legend Engelbert Humperdinck is to record a duet with Rock God Gene Simmons of Kiss. 'Isn't that something. It is going to be very exciting,' said Engelbert. Engelbert will head back to the studio when he gets home to Los Angeles to record the yet-to-be named song with Gene. The duets album, due in October, already has an impressive line-up of stars who wanted to be part of the project. 'There's Elton, there's Smokey Robinson, there's Willie Nelson, Kenny […]