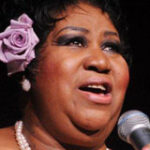 Aretha Franklin has once again postponed her hometown show at Detroit’s DTE Energy Music Theatre, citing ongoing medical treatments. It has never been revealed what the reason is for the current treatments, only that there have been a series of them and that she is nearing the end.
Franklin’s publicist issued a statement for the singer where she says she is postponing the concert until next summer due to a ‘my miscalculation of the end of my treatment.’ She went on to say that ‘It would be totally disruptive to stop them now and go into concert with total success right at the door, 100%.’

There is more to our pal Nile Rodgers than Chic! The R&B genius was behind hits for Diana Ross, Sister Sledge, Debbie Harry and Sheila E and those hits have been compiled for a double disc set though Warner Music. 'Nile Rodgers Presents The Chic Organization ' Up All Night' highlights the 40-year career of Nile Rodgers with songs like 'Le Freak', 'Good Times', 'Upside Down', 'Backfired' and 'We Are Family'.