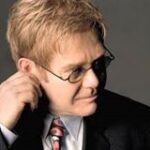 Elton John and Bernie Taupin did not rip off a song called “Natasha” for their own hit “Nikita” according to judge. A lawsuit was brought by songwriter, Guy Hobbs, alleging that the John/Taupin song took numerous themes from his original composition including a love affair between a westerner and a woman in communist Russia, descriptions of the woman in the songs and the similar names.
Seventh Circuit Court of Appeals judge Daniel Manion dismissed the lawsuit, saying that copyright laws protect against direct copies of a composition but do not include general concepts such as ‘incidents, characters or settings which are as a practical matter indispensable, or at least standard, in the treatment of a given topic.’
The judge also proved that he looked closely at the subject matter in the song when he wrote of the different concepts. ‘Although both songs contain the idea of an impossible love affair due to a conflict, each song expresses this general idea differently. That is, ‘Natasha’ and ‘Nikita’ tell different stories about impossible romances during the Cold War. ‘Natasha’ tells the story of two people who briefly become intimate, but who are forced to part ways because one is not free (presumably because of the Iron Curtain) and must sail away. But for a short time, at least, he could hold her hand, whisper in her ear, run his fingers through her hair, and cry with her when forced to separate. ‘Nikita’ tells the tale of a man who sees and desires a woman whom he can never meet because she is on the other side of a ‘line’ held in by ‘guns and gates’ (perhaps the Berlin Wall). He could only imagine and wish for a chance to hold her, to tell her about his home, and if the border guards were to leave and set her free then to find and meet her, but he thinks that will never happen.’

In the wake of the Trayvon Martin verdict in Florida, Stevie Wonder has made the decision to avoid Florida and all other 'Stand Your Ground' states until the laws are changed. Wonder was performing in Quebec when he told the audience 'The truth is that, for those of you who've lost in the battle for justice, wherever that fits in any part of the world, we can't bring them back. What we can do is we can let our voices […]