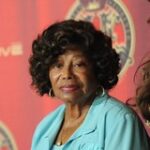 Michael Jackson’s mother took the stand Friday in defense of her late son against accusations made by attorneys for AEG Live. It was an emotional day in court as Katherine Jackson, 83, testified about the loving son and father the singer was before his 2009 death. She also admitted the past 12 weeks of testimony have been hard for her to hear.
“The most difficult thing is to sit in this court and listen to all the bad things they’re saying about my son. A lot of those things are just not the truth,’ the matriarch told jurors. “I know my son was a very good person. He loved everybody. He was in the Guinness Book of World Records for the entertainer who gave the most to charity.”
The Jackson family attorney showed jurors a photo of Michael as a young child. Katherine recalled the King of Pop as an energetic boy who grew up to be a caring and admirable man who enraptured the world with his talent.
“Michael was always sensitive and loving,’ Katherine said. ‘Yes, he was born that way. Even in my arms, he couldn’t keep still. He was dancing to the music.” Katherine is suing AEG Live for what she alleges was negligence in the hiring and supervision of Conrad Murray. Murray was hired as Michael Jackson’s doctor while the singer prepared for his ill-fated “This Is It” comeback tour.

Elton John and Bernie Taupin did not rip off a song called "Natasha" for their own hit "Nikita" according to judge. A lawsuit was brought by songwriter, Guy Hobbs, alleging that the John/Taupin song took numerous themes from his original composition including a love affair between a westerner and a woman in communist Russia, descriptions of the woman in the songs and the similar names. Seventh Circuit Court of Appeals judge Daniel Manion dismissed the lawsuit, saying that copyright laws […]