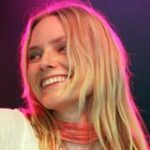 The distribution of digital music continues to get more and more complicated. In the latest case to hit the courts, singer/songwriter and former Til Tuesday leader Aimee Mann has sued MediaNet, a company that is responsible for the serving of music to such services as Yahoo Music, Playlist.com and radio services such as Songza and Radio 360.
In the filing, Mann states that she had a contract with MediaNet starting in 2003 for the use of 120 of her tracks. That agreement stays in effect until one of the parties terminates it, which Mann says she did in 2007. Her lawsuit contends that the company continued to stream her works and she may have royalties due to the tune of $18 million.

A Flock of Seagulls are short $70,000 worth of equipment and the drives containing 18-months worth of work on a new album, the result of an overnight heist of their tour van. The band had played in Bellflower, CA on Saturday night and drove to Downey where they stayed at a Comfort Inn. Around 2 AM Sunday morning, someone broke into their van and drove away, an action that was captured on the hotel's security camera. According to lead singer […]