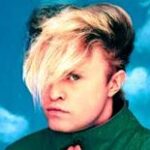 A Flock of Seagulls are short $70,000 worth of equipment and the drives containing 18-months worth of work on a new album, the result of an overnight heist of their tour van. The band had played in Bellflower, CA on Saturday night and drove to Downey where they stayed at a Comfort Inn. Around 2 AM Sunday morning, someone broke into their van and drove away, an action that was captured on the hotel’s security camera.
According to lead singer Mike Score, they lost their tour equipment, instruments, stage clothes, cell phones and hard drives that contained the songs for Score’s first solo album. There was no indication of whether Score had backups of the files, although he said it was 18 months of work down the drain.

Michael Jackson's mother took the stand Friday in defense of her late son against accusations made by attorneys for AEG Live. It was an emotional day in court as Katherine Jackson, 83, testified about the loving son and father the singer was before his 2009 death. She also admitted the past 12 weeks of testimony have been hard for her to hear. "The most difficult thing is to sit in this court and listen to all the bad things they're […]