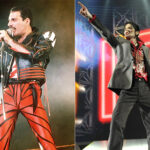 (AP) Rumors are swirling that late greats Michael Jackson and Freddie Mercury are set to be featured on an album of duets to be released this fall. According to The Huffington Post, “Mercury’s former Queen bandmates, Brian May and Roger Taylor, broke the news” of the collaboration to The Times of London and that “something for folks to hear” will be available in two months. Three tracks were originally recorded in 1983 in Encino, Calif., but according to Mercury’s manager at the time, Jim “Miami” Beach, the pairing met an early end because of a llama-induced argument.
“They got on well except for the fact that I suddenly got a call from Freddie, saying, ‘Miami, dear, can you get on over here… You’ve got to get me out of here. I’m recording with a llama … I’ve had enough and I want to get out,” Beach said in an interview for the 2012 documentary “Freddie Mercury: The Great Pretender.”
Specifics regarding the alleged release, whether it will be just the tracks or a full album, have not be revealed but fans can rest assured that something is in the works. According to MSN, the Jackson estate gave permission to Taylor and May to “revamp the recordings.” Hopefully no llamas will interfere.
The “Bohemian Rhapsody” frontman died in 1991 after a battle with AIDS. Jackson died in 2009 of a propofol overdose.

J.J. Cale has died from a heart attack at the age of 74. The death of the legendary Grammy Award winning singer songwriter was announced on his Facebook page today. 'We've lost a great artist and a great person tonight. JJ Cale passed away at 8:00 pm on Friday July 26 at Scripps Hospital in La Jolla, CA. He had suffered a heart attack. There are no immediate plans for services. His history is well documented at JJCale.com , http://www.rosebudus.com/cale/ […]