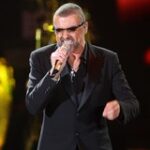 George Michael has revealed the permanent trauma from his car accident for the first time. The 50-year-old British singer sent motorists swerving when he suddenly tumbled from the Range Rover he was a passenger in on the busy M1 motorway near St. Albans on May 16. He was airlifted to hospital by helicopter, only narrowly escaping oncoming traffic on the busy motorway.
George suffered head injuries, cuts and bruises in the incident and was under watch for two weeks before his release. UK Newspaper “The Sunday People” has acquired photographs of the musician which clearly captures his scars from the collision. The star was photographed outside of his North London home this week with a shaved head that highlights a deep scarred gash on the back of his skull. There was also a large scar on his left elbow present.
According to the publication George is “on the mend” and is maintaining positive spirits following the tragedy. “George is enjoying life,” a source said. “A few scratches but he’s glad to be alive.”
In 2010 the star received an eight-week jail sentence for crashing his Range Rover while under the influence of cannabis, but George was cleared of charges related to the May traffic accident. The collision marks the latest in a string of health woes for the star, who had to cancel shows due to pneumonia and put more concerts on hold as he battled severe anxiety last year.

Joan Jett and her band, the Blackhearts, are releasing their first album in seven years with "Unvarnished," out October 1 on Blackheart Records. Jett has said in a statement that the album is the most autobiographical she has ever released. Look for the band to perform the first single, "Any Weather," next Thursday (August 8) on Jimmy Kimmel. Jett is looking for her first charting album since 1990’s "The Hit List." Since that time, she has released six studio albums […]