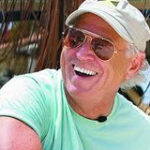 Jimmy Buffett has a new studio record, “Songs From St. Somewhere,” scheduled for release August 20 on his own Mailboat Records. The album, with 15 brand new songs plus a bonus track, was recorded this spring in various locales including Key West, Nashville, Muscle Shoals, Austin, Miami, St. Barts and London. In the liner notes, Jimmy says: “The island where much of the work on this record was done is St. Barthelemy.’
Jimmy wrote or co-wrote eleven songs on this new release, and has always enjoyed working with other artists. For this album, Jimmy assembled a very impressive and talented team of collaborators, from songwriter Mark Knopfler, who also performs on two songs, including his own “Oldest Surfer On The Beach,” to Emilio Estefan, who produced the Spanish version of “I Want To Go Back To Cartagena.” Old friend Jesse Winchester wrote “I Wave Bye Bye” and Jerry Jeff Walker’s son, Django Walker, co-wrote “Somethin’ ‘Bout A Boat.” The first single, “Too Drunk To Karaoke” is a duet with Toby Keith.

In celebration of the 50th performance of "Rod Stewart: The Hits.", Rod Stewart today announced that he will extend his original two year contract at The Colosseum at Caesars Palace and will return with his critically acclaimed show "Rod Stewart: The Hits."for two more years beginning this fall. As the two-time Rock and Roll Hall of Famer wraps his summer run of performances this week, nine new November concerts have been added from November 6 through 24. "I'm thrilled to […]