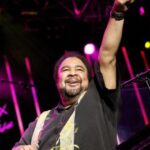 George Duke, the Grammy-winning jazz keyboardist and producer whose sound infused acoustic jazz, electronic jazz, funk, R&B and soul in a 40-year-plus career, has died. He was 67. His biggest pop success came with Stanley Clarke on “Sweet Baby.”
A representative for Duke said the performer died Monday night in Los Angeles. Duke was being treated for chronic lymphocytic leukemia.
On tour as part of the George Duke Trio, he performed in Los Angeles at a show where Adderley, Zappa and Quincy Jones were in attendance. Duke soon joined Zappa on a tour for a year in 1969. He joined Adderley’s band in 1971. He met Clarke through Adderley, and they formed the Clarke/Duke Project. Their song “Sweet Baby” was a Top 20 hit on the Billboard pop charts.
Duke became a solo artist in 1976 and released more than 30 solo albums. He also produced for Miles Davis, Smokey Robinson, Gladys Knight, Dionne Warwick and Natalie Cole.

Diana Ross played the first of two shows at the Hollywood Bowl on Friday night to a large crowd, putting on a 75-minute show that included four costume changes. Reviews of the show ran from 'Still Show-Stopping' to a lengthy riff on her being hoarse in the middle range and a number of comments on the length of the show. What is impressive is that she put in full performances of a number of her Supremes-year hits to open the […]