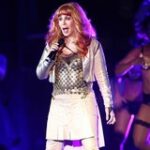 Cher admits she had no “valid reasons” for finding it difficult to accept her transgender son. The 67-year-old singer had son Chaz with her ex-husband Sonny Bono, who died in 1998. Chaz was born a girl (Chastity) and underwent gender transition to become a man, something his mother had a difficult time understanding at first.
“You wouldn’t think it, but I think I knew Chaz was gay way before anybody else, when she was young. I think of Chaz in the past as a she. Chaz is now definitely a he,” she told BBC News. “I didn’t take it well and I don’t know why exactly, there were many reasons, but none of them were valid.”
The pair are now on better terms and Cher is also reigniting her music career with a new album called “Closer to the Truth” and an accompanying tour.
Cher’s first record came out in 1965 and she is still astounded by how much has changed within the industry since then. There is a lot more pressure on young artists now and she feels lucky to be at an age where she doesn’t care about others’ opinions.
“I could ride my motorcycle around and nobody would follow me or take pictures. I could go dancing and dance forever. Now I’ve just got to be prepared to have sweaty pictures [of me] everywhere,” she laughed.

England's biggest music star, Cliff Richard, will deliver a one-two punch on November 11th in the U.K. with the release of his 100th album, "The Great Rock & Roll Songbook" and the DVD "Still Reelin' and A-Rockin'" The album features fifteen early rock songs that inspired and influenced Richard over his lengthy career. The DVD features a new band and was recorded at the Sydney Opera House in Sydney, Australia. The show includes over two-hours of Richard's biggest hits.