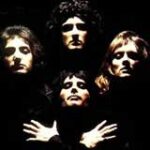 Queen guitarist Brian May has hinted that the band are considering making a full album from unreleased recordings featuring their late singer, Freddie Mercury. The band, which also features drummer Roger Taylor and now retired bassist John Deacon last released new music featuring Mercury in 1995, when the singer’s final recordings were paired up with archive tracks and restructured versions of his solo songs for the album “Made In Heaven.”
At the Freddie For A Day event in Mayfair this weekend, May said: “We thought we’d exhausted everything that was around and could be worked on, but since then a number of things have come to light from various sources that we’d just plain forgotten about, including the stuff with Freddie and Michael Jackson. Just a couple of weeks ago, we thought: Maybe we shouldn’t be just working on bits and pieces? Maybe we should be heading towards an album? It just might be.”
A number of unreleased Queen songs have leaked as bootlegs over the years, in various states of completion. Their archives also include unreleased material with David Bowie, Andy Gibb and Rod Stewart, and one rumored Michael Jackson collaboration, “Victory,” remains unheard, and could be included in this project.
Queen’s last studio album, “The Cosmos Rocks” (with Paul Rodgers) was released in 2008.

T'pau are thrilled to announce their first London headlining show in over 15 years. The "Heart & Soul" group will end an incredible year of touring with a performance at Islington Assembly Hall on November 23rd. Spring 2013 saw T'pau begin a 28-date nationwide tour to mark the 25th Anniversary of the band's breakthrough album, the quadruple platinum selling "Bridge Of Spies." Carol Decker and co-founder, Ron Rogers, and their band couldn't have dreamt that their amazing run of knock-out […]