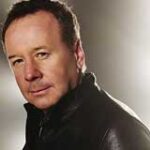 Simple Minds haven’t released a live DVD since 1989’s “Live in Concert” and they think it is time to end that drought. Today on their official page, the band announced that they would be filming their November 27 show at the brand new Hydro in Glasgow, Scotland for release on DVD and Blu-Ray in 2014.
This news is somewhat monumental as the band’s last “Live in Concert” film, recorded in Verona way back in 1989, is now regarded as a rock classic.
Jim Kerr and Charlie Burchill, who were given a guided tour of the brand new Hydro venue today, have described it as something very special indeed. This, coupled with the bands current great form as documented widely by critics and fans alike, will make the Glasgow show a pilgrimage for Simple Minds fans from across the world.

It's an operation that has become relatively common but is, nonetheless, disruptive to a normal life for a few weeks. Brian May of Queen underwent a knee replacement operation earlier today that should take away the pain that he has been suffering for some time. There is no estimate of how long he will be down for recovery. May revealed the operation on his webpage on September 27, saying that the knee was continuing to deteriorate. Yesterday, he added "I […]