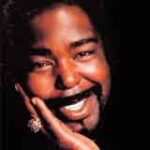 R&B legend and frequent “Lost 45” guest Barry White was posthumously awarded the 2,506th star in the Hollywood Walk of Fame on Friday. What took them so long? Motown founder Berry Gordy spoke on behalf of the late Barry White, who died on July 4, 2003. Friday marked what would have been White’s 69th birthday.
“People can’t get enough of Barry White’s music and even though he passed away many years ago, his songs will live on in the hearts of many,” stated Ana Martinez, Producer of the Walk of Fame ceremonies. “We are honored to have Barry White, his legendary voice and timeless songs immortalized on the Walk of Fame.”
The deep voice of Barry White produced a string of hits in the 70s including ‘Can’t Get Enough of Your Love, Babe’, ‘You’re The First, The Last, My Everything’, ‘I’m Gonna Love You Just A Little More, Baby’, ‘Never Never Gonna Give You Up’ and his 40-piece Love Unlimited Orchestra’s ‘Love Theme’. He was a two-time Grammy Award winner. White was a diabetic and suffered high blood pressure. He died of kidney failure at the age of 58.
White’s star can be found at 6914 Hollywood Boulevard.

Cher admits she had no "valid reasons" for finding it difficult to accept her transgender son. The 67-year-old singer had son Chaz with her ex-husband Sonny Bono, who died in 1998. Chaz was born a girl (Chastity) and underwent gender transition to become a man, something his mother had a difficult time understanding at first. "You wouldn't think it, but I think I knew Chaz was gay way before anybody else, when she was young. I think of Chaz in […]