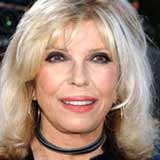 Our pal, 73-year old Nancy Sinatra, the former pop star and daughter of the legendary Frank Sinatra, will release a new album in December. Nancy Sinatra digs into her archives to unearth 15 never-before released recordings on “Shifting Gears” December 3 via her own Boots Enterprises label.
Sinatra has spent over five years restoring and remixing these masters from her vault, of which she says “It has been a real struggle because when we say vaults we really mean it. Some were multi-track, some were 1/4 inch and some were only cassettes!”
The original tracks were produced and arranged by Billy Strange with the compilation produced by Michael Lloyd. The songs are described as big ballads with sources from Broadway to pop hits of the 70s. Sinatra has said that she sequenced the songs to tell the story of a love affair.

Before anyone starts booking flights and reserving rooms, keep in mind that rumors like this come up quite often and yet nothing occurs....but here we go again. Agnetha Faltskog, one fourth of the group ABBA, has told a German newspaper that a reunion of the group for the 40th anniversary of their commercial breakthrough is "something we're thinking about." Faltskog has been one of the main sticking points to any reunion due to her private lifestyle along with an aversion […]