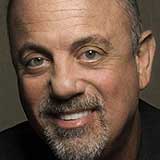 Billy Joel will become the first “franchise” singer at New York’s Madison Square Garden, playing one show per month until there is no longer demand. The schedule has been set through may with a May 9 date, which also will be his 65th birthday, added to the already scheduled January 27, February 3, March 21 and April 18.
Joel said in a statement “Performing at Madison Square Garden is a thrilling experience. I’ve played different venues all over the world, but there’s no place like coming home to The Garden. Since my first show in 1978, I’ve always looked forward to the energy of the crowd. I’m honored to be joining the Madison Square Garden family and look forward to taking the stage of the newly transformed Garden to create many more memorable nights. I’ve been touring almost all my life. The idea of being on the road for long periods of time isn’t appealing to me at this point. I can commute to work, like everyone else does. You take the schlep factor out.”

Phil Collins never officially retired. There was originally his book on "The Alamo," there were statements about wanting to spend more time with his family and reports of nerve damage to his hands and back problems that meant he had to tape the drum sticks to his hands. All of that may now be in the past as he has told a German paper that he is considering coming back to music. His two boys have moved to Miami […]