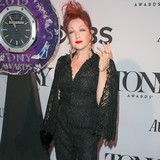 Cyndi Lauper says she would ‘love’ to do another musical. The singer already won a Tony Award for Best Original Score for her musical “Kinky Boots” this year. According to Cyndi, another musical is just one of many things she would love to accomplish in 2014. “I’d like to work on another Broadway musical. I’d like to work on more music. I love TV; I’d love to work on a scripted TV show with some friends of mine,” Cyndi told Entertainment Tonight.
Although the pop legend is eager to start more projects, she also wants to spend more time with her family. Cyndi has been married to actor David Thornton since 1991, and they have a son called Declyn Wallace, 16.
“I’d like to see more of my kid and my husband-be home a little more,’ she admitted. Aside from her career and family, the 60-year-old is known for her tireless activism on behalf of LGBT rights. Her “True Colors” Fund has a concert called Home for the Holidays to raise funds for LGBT homelessness. Held in the Beacon Theatre in New York City, the singer was joined on stage by stars such as Pink and Nelly Furtado.

Rock Legend and media mogul, Gene Simmons will mentor and jam with campers along with fellow rock star friends at Rock 'n' Roll Fantasy Camp offering an opportunity of a lifetime at its Las Vegas studios. The camp will also feature Tommy Thayer (KISS), Sebastian Bach (Skid Row), Steve Stevens (Billy Idol), Dave Ellefson (Megadeth). Together alongside Simmons, they will help musicians of all levels form bands, learn or perfect their knowledge of an instrument, write and record a song. […]